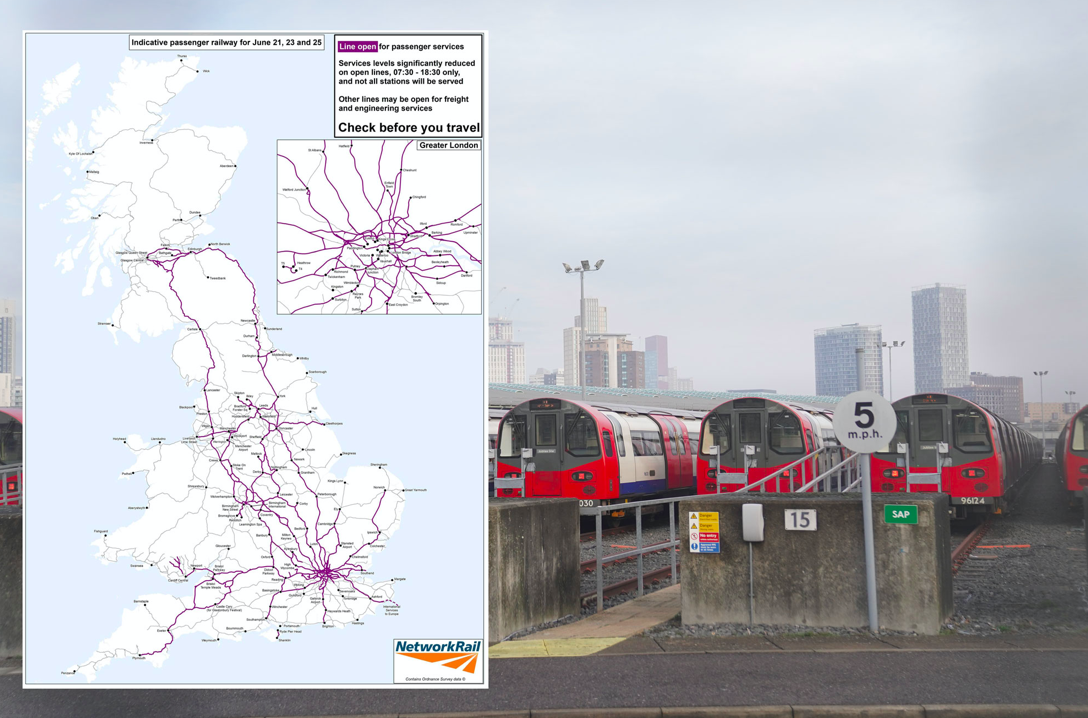 The Network Rail map shows the services that will be affected

Network Rail has released a map which shows the scale of the rail strike chaos set to hit the country next week.

Members of the Rail, Maritime and Transport (RMT) union at Network Rail (NR) and 13 train operators are due to strike for three days next week which will lead to huge disruption to services.

The RMT and Unite are also striking in the London Underground on June 21, the same day as the first railway strike, in a separate line on jobs and wages.

NR said half of UK rail lines will be closed next week, with very limited service on lines open from around 7.30am to 6.30pm.

A passenger map showing where trains will not run has now been released by NR to help passengers plan their journeys.

You can access the full map and see more information about Network Rail.

NR said no passenger services will serve places such as Penzance in Cornwall, Bournemouth in Dorset, Swansea in South Wales, Holyhead in North Wales, Chester in Cheshire and Blackpool, Lancashire .

There will also be no passenger trains running north of Glasgow or Edinburgh.

Lines open include the West Coast Main Line from London to Scotland via places such as Birmingham and Manchester.

The strike days are Tuesday, Thursday and Saturday next week, with passenger numbers expected to be limited to around 4,500 – up from around 20,000 when services are operating as normal.

Watch: UK rail strikes: what are the reasons for the walkout?

NR said the days following the strikes (June 22, 24 and 26) the entire network will reopen, but they warned of disruption until services recover.

Only about 12,000 to 14,000 services will be able to operate on the days following the strikes because flagmen and control personnel will not work the night shifts which begin on the strike dates.

Passengers “who must travel” are urged to “plan ahead” to ensure they can complete their journey within this window, NR said.

The last services from London to Scotland will leave in the early afternoon.

Ahead of next week’s strikes, a war of words has erupted between unions and the government after Downing Street accused unions of moving to industrial action without proper negotiations.

Boris Johnson’s official spokesman has dismissed claims the government could do more to prevent the transport chaos faced by commuters, saying ‘it’s up to the unions to have these negotiations with groups like Network Rail “.

But union leaders hit back, accusing the prime minister of “turning his back” on the talks.

Transport Salaried Staffs Association (TSSA) general secretary Manuel Cortes said he wrote to Johnson in May saying he was ready to hold talks with the prime minister.

Mr Cortes said: “These are just empty words from the top of Government, with Johnson clearly turning his back on the talks and happy to face a summer of discontent on our railways.

“Instead of sitting down with us and seeking to resolve this dispute, Johnson and his ministers have done everything they can to undermine any prospect of a negotiated settlement.”

NR chief executive Andrew Haines said the strikes had been timed to cause “maximum disruption”, while Tim Shoveller, the organization’s chief executive for the North West and Central region, warned guard against “six days of disruption” while services resume.

Steve Montgomery, who chairs the industry body Rail Delivery Group, said the strikes “will affect the millions of people who use the train every day, including key workers, students taking exams, those unable to work at home, holidaymakers and those attending important business and leisure events”.

He added: “Our plan is to maintain as many services as possible, but significant disruption will be inevitable and parts of the network will not have service, so passengers should plan their journeys carefully and check their train times.”