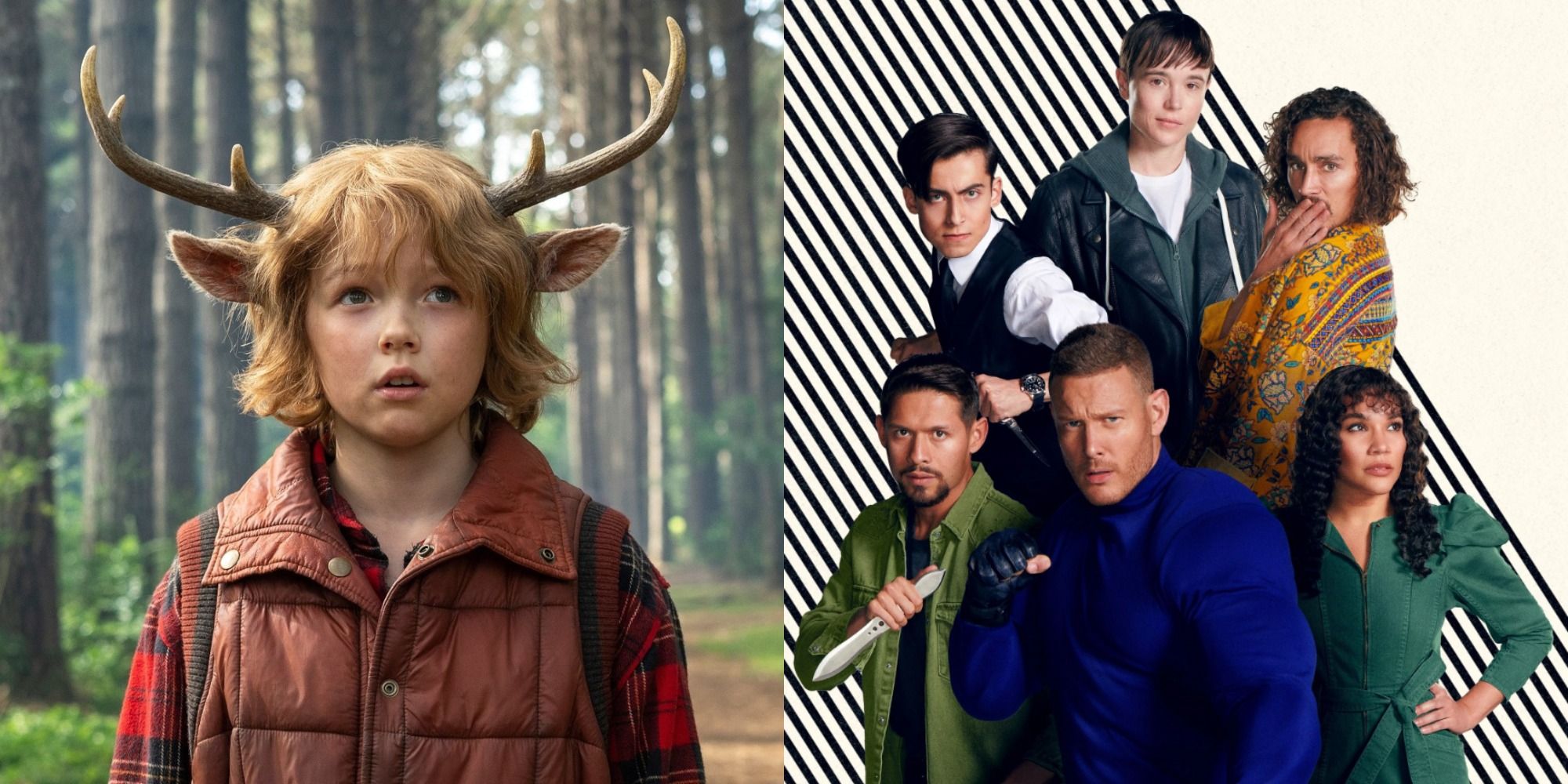 With the third season of The Umbrella Academy released June 22 and Neil Gaiman’s DC Comics Project The sand man series slated to arrive later in 2022, Netflix continues to be one of the best streaming destinations for comic book fans. And the draw isn’t just the big stunts and CGI. Netflix allows creators to dig deep into character development and complex storylines, spawning endearing heroes like beat-up Spaceboy Luther Hargreeves and introverted Kinsey Locke.

With a plethora of comic book-based series to watch, it’s often difficult for fans to sort through originals from shows adopted or re-run from other networks, like Lucifer and The Walking Dead. Netflix’s best adaptations excel in cutscenes, stunts, well-developed characters, and engaging storylines, making it worth knowing the difference.

Born from the Dark Horse comic book series created by Gerard Way, who happens to be the lead singer of My Chemical Romance, The Umbrella Academy is a near-perfect combination of a dysfunctional family equipped with a superpower and the apocalypse.

Right off the bat in the first episode of Season 1, a stylized and exuberant fight sequence, set to a boppy take on the old standard “Istanbul (Not Constantinople)” from They Might be Giants, encapsulates the spirit and the playfulness that the show’s writers use to carry a story laced with loneliness and pain. Their masterful combination makes The Umbrella Academy a fan favorite.

Netflix’s adaptation of ‘The Man Without Fear,’ created by Stan Lee and Bill Everett, turns the action and violence up to 11. Murdock unleashes his rage against the culprits in graphic and intense scenes of destruction physical.

A cinematic delight, daredevil excels at using extended single shots where the camera glides effortlessly from scene to scene. Hell’s Kitchen provides a perfectly gritty milieu of dark alleyways and columns of light for the stunts, and the writers conjured up one of the best storylines in this lineup. Appearances from other MC personalities like The Punisher and Elektra are just the icing on the cake.

As a Netflix spin-off the daredevil series, The Punisher remains firmly rooted in the MCU. The character with the skull t-shirt is a tortured soul seeking revenge in this darkest of Marvel’s dark tales.

Beyond Frank Castle’s inner turmoil, the series’ beating heart is Frank’s relationship with villain-turned-amnesiac Billy Russo, which in turn revolves around themes of guilt and betrayal. Emotionally moving, The Punisher is frenzied fun, fueled by its iconic fight scenes and terrific “Punisher” sense of humor. This makes it one of Netflix’s best live-action adaptations from the Marvel Universe band. That’s if viewers can handle the violence.

This diabolical reinvention of the treacly Sabrina: The Teenage Witch stakes its own bloody ground with dark journeys into the realms of the occult, horror, and dark magic. Half-mortal, half-witch Sabrina Spellman creates a harrowing internal conflict as she navigates between worlds filled with Sabrina’s powerful friends and enemies.

Related: 10 Best Comic Book Movies On Netflix According To IMDb

At its best, the show revels in witchy versions of traditions like Thanksgiving and lets big supporting characters like the sweet, vengeful Hilda chew up the scenery. If it takes a few episodes to settle in and find your way, the creators’ enthusiasm for indulgences of all kinds makes Chilling Adventures of Sabrina a guilty pleasure.

After bouncing around in Hollywood’s development limbo for years, locke and key finally found a home at Netflix. A fantasy-horror hybrid, the driving force behind the series is the three children and powerful magical keys, as well as a demonic entity in an old Victorian mansion known as the “Keyhouse” where muted violence eschews any graphic .

With gorgeous cinematography and dazzling special effects, locke and key comes reasonably high on the “scary” scale, though its sometimes overworked coming-of-age storyline dominates. The mysteries pile up too thick, especially with the Lost people involved, and that is worrying. Where the show excels is in its performances and how it subtly deals with the legacy of childhood trauma. With its likable characters and gently spooky tone, locke and key is a great genre debut for young teens.

Fourteen years after his debut in Marvel comics, Jessica Jones comes to life as Kristin Ritter. As a dark-soaked, alcoholic, and sharp-tongued private eye, Jessica inhabits the seedy side of the tracks. He is a character damaged in a dangerous occupation and in portraying his world with unflinching clarity, the fascinating Jessica Jones is by far the most adult-oriented Marvel series on Netflix.

Jessica Jones is Krysten Ritter and Krysten Ritter is Jessica Jones. Ritter’s portrayal of Jessica struggling with mental illness is brilliant, and her performance is key to drawing viewers to the show, much like Jon Bernthal steals the show as The Punisher. Although storylines can meander, Ritter’s performance as a hurt and insecure young woman keeps the viewer totally locked in.

Step into Harlem-born Luke Cage, an inscrutable black-skinned superhero whose catchphrase is “Sweet Christmas.” You’d think the narrative could revel in the Marvel bash ’em up mode like so many others, but Luke Cage surprises with an effective infusion of social conscience and intellectual debate passionate enough to stir up controversy.

Luke Cage faces some unusual issues for a Marvel hero: He’s truly an earthling, dealing with standard human issues like the inconveniences of a famous public figure and the double-edged consequences of policing a crippled neighborhood. crimes in New York. With the courage to explore controversial issues in the black community and a sense of fun to have great hip-hop groups like Rakim, Ghostface Killa and Joi lighting it up in “Harlem’s Paradise”, Luke Cage is both entertaining and meaningful.

There are many stories to be told in the aftermath of the apocalyptic “Great Crumble” and subsequent “Sick” pandemic, when survivors begin having human/animal hybrid fur babies. If that sounds crazy enough, it is. Greedy delves into madness from time to time with forays into pure science fiction, fantasy and stark realism.

With fearful humans hunting hybrids, one would expect this fantasy to live on the dark side alongside other DNA milkshake projects such as The island of Doctor Moreau but, surprisingly, it’s often quite soft and light. A complex, interesting raft Greedy the characters anchor the spectator in the middle of the strange narrative currents. Yes, there is heartbreak, pain and fear because of the apocalypse, but human (and human hybrid) survival in difficult times requires a sense of hope and acts of kindness, and that is where this eccentric treasure excels.

All hail the bearer of the Halo! New performances and superb fight choreography fuel a series that deliberately oscillates between the serious and the absurd. The warrior nun The series is a freshly made salad of an ancient order of nuns, an unwitting heroine Ava (ah, the charismatic Alba Baptista), cool weapons, and a typical variety of demons. Warning: this is a nice relay salad, not an overpriced Waldorf at the Grand Hotel Tremezzo.

Promising a strange tonal concoction, warrior nunThe resurrection and demon-hunting story doesn’t always escape the old tropes of its fantasy genre. It’s not as unique as it could be. That said, the Warrior Nun and her sidekicks pack a lot of binge-watching mojo, delivering a fun, pulpy ride for those into that sort of thing. In terms of story potential, the sky is the limit. The maturity of a second season could well bring beautiful things.

Single moms have their plates full when they raise a willful son, but when he starts displaying superpowers, everything mom thought she knew goes out the window. True to the comics that spawned it, Raising Dion never strays from the playful sensibilities of the comic book world.

Serial, Raising Dion has a problem: Family drama and competing superhero storylines often get heavy and break any tonal rhythm in episodes. Yet he handles a sense of adventure, curiosity and innocence with such aplomb that he captivates young children. The show promises to be awesome if someone finds a way to put it all together.

Next: Netflix’s 10 Best Anime Original Series According To Rotten Tomatoes

What Movies and TV Shows Are TikTok’s Top 10 Trending Sounds From?