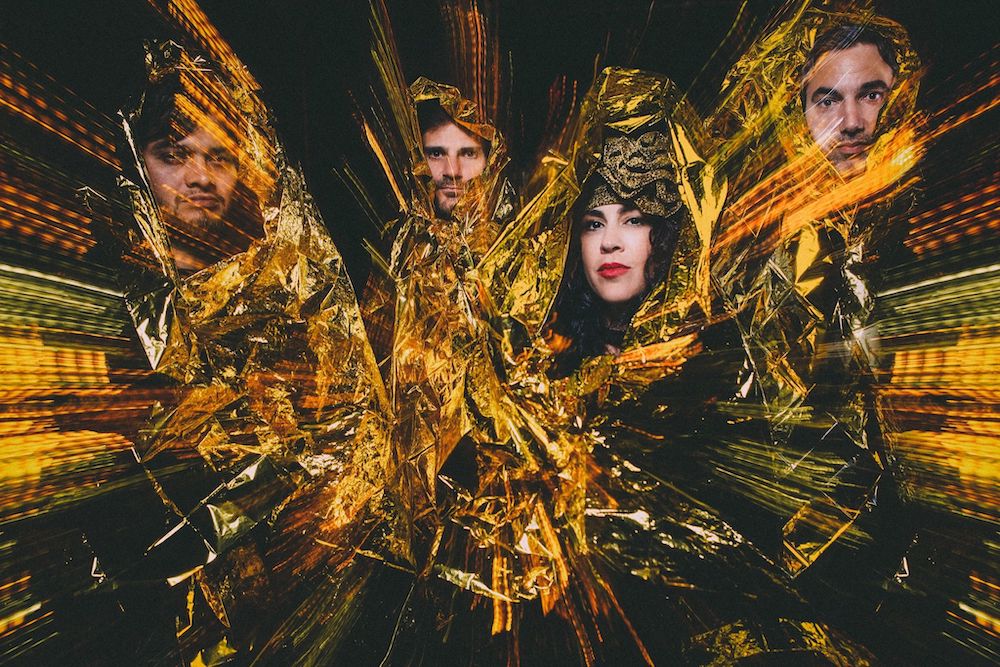 The people of Long Beach asi-fui drop their new single, “Gold,” accompanied by a scintillating new music video to match the song’s uplifting and exploratory theme. Tint with an indie-rock sound and a floating voice, “Gold” instantly enters your head and reverberates throughout your body. It’s high, mid-tempo beats over steady drums, floaty guitars, and a subtle bass line. Like shimmering gold in the light, it glistens with sparkling brilliance, riding its groove with a rich, malleable quality as it picks up at the end to descend back into its effortless freshness.

Written as an abstract metaphor to capture the feeling of when creativity and inspiration become ubiquitous, “Gold” sounds simple at first, but in reality is covered in lyrical depth, showcasing the songwriting talent. by vocalist/bassist Tatiana Velazquez.

“The song ‘Gold’ is basically about the feeling of inspiration taking over,” the band notes. “How it can sometimes be a gamble or a hungry hunt to find it, and how once you get the high you want it all the time.”

The music video for the song, conceptualized and co-directed by Velasquez herself, and shot by Ceethreedom, has a gold-laden aesthetic that starts out looking like the prom you wish you had — the band dressed in an outfit in black tie and playing in a room lined with gold leaf. The video quickly turns into something of a jaunt with the group panning for gold at the beach, diving through hallways wearing gold masks, opening what would normally be a MacGuffin (but let’s face it, there’s probably gold in there) and playing a high stakes poker game with gold cards and betting with gold chips. The light and aesthetic adventures follow one another with the group playing in their golden room and end with a crazy take at the card table.

“This clip was very special for us because it was a collaboration with Casey Lewis, our reference photographer with whom we have worked since the creation of the group in 2015”, continues Asi Fui. “Casey has always been a dream to work with. Tatiana considers the concepts/themes and Casey always executes. We were supposed to start shooting the week it all shut down in March 2020, but I’m glad we were able to get there almost two years later.

The title track from their new 4-song EP, Gold, which releasing on April 15 (pre-order it here), Asi Fui’s new single is just a taste of their music to come. Originally written in 2019, the band returned to the drawing board after the coronavirus pandemic hit the world. Take the time to experiment with their sound and add a new band member, the guitarist Vince MazzaAsi Fui has also amassed an array of new unrecorded material which they are previewing during live shows.

Asi Fui will play shows in Southern California, including a hometown show at Alex’s Bar in Long Beach on April 16 with Fartbarf, Chapis, Slice, DJ Rad Wolf; and in Los Angeles at the Paramount on April 30 for Chido Chevere Cool by Jose Galvan with Yungatita and Chola Orange.

Composed of Velazquez, Mazza, drummer Ryan Reiff and guitarist Miguel Vasquez, Asi Fui creates atmospheric music that blends a variety of genres and tones, including Afro-Cuban rhythms, psychedelia and indie rock. The group’s name comes from a Spanish saying that Velazquez’s grandmother used to write in her photographs with what she was doing at the time. Its meaning; that’s how I was. The simple phrase has become a guide for the group as it grows, weathers life’s many surprises, and reacts at a moment’s notice.

Miranda Lambert reveals she won’t be attending the 2022 GRAMMYs