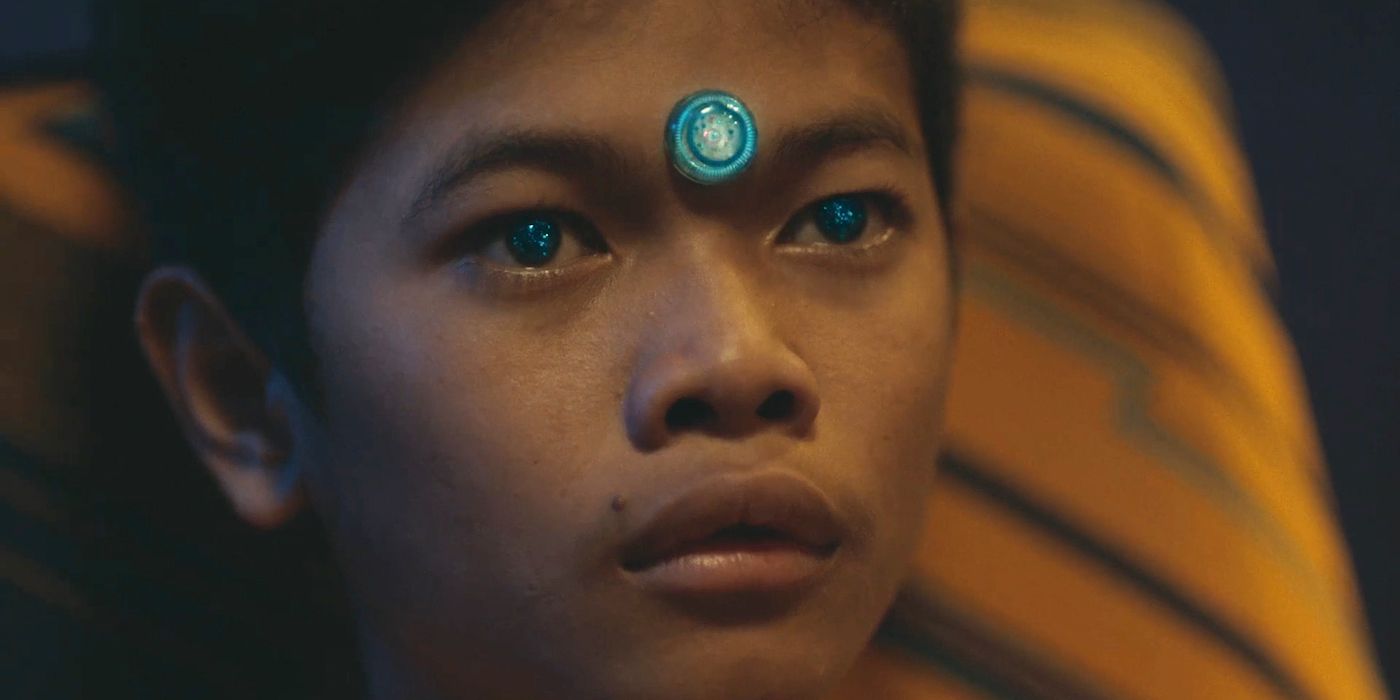 When we are first immersed in the world of science fiction karmalinkthe flawed but fascinating feature debut from the writer-director Jake Wachtel, it is in a sparsely populated space but still overflowing with possibilities. Above an immaculate red carpet, the foreground is of a chair and several devices with snake-like chords sticking out of them. A man then enters the frame alone and proceeds to start up the various devices. He moves methodically and without haste, removing his shoes before placing electrodes on his head. He then begins to recount the karma before we are transported back in time to a man who attempts to steal a small golden Buddha statue. Before he can flee with his loot, the man is confronted by someone who claims to recognize him. Panicked, this timeless thief runs away before burying the statue in a field. The film then cuts to Leng Heng (Leng Heng Prak), a 13-year-old kid living in the near future of Phnom Penh, Cambodia. Even with new technologies, from drones to augmentations of our brains, her family is at risk of being evicted from the neighborhood in which they have lived for three generations.

It’s the very beginning of a film that showcases the power of technology and the divine connections we have in a similar light. Visions of alternate spiritual planes are intertwined with more familiar sci-fi elements, making the point where one ends and the other begins difficult to identify. You see, every night, Leng Heng finds himself daydreaming about his past lives. That man who stole the statue? This is just one of the many memories we’ll see our young protagonist grapple with over the course of the film. With the knowledge he gains, he enlists his group of friends and scrappy newcomer Srey Leak (Srey Leak Chhith) to help him find the statue. They hope they can use it to prevent the impending eviction from happening. It all plays out with a playful yet dark sensibility as we watch these precocious children do their best to save themselves and those they love from being displaced. However, where things get really interesting is when it cuts to its final act where more details are revealed about why Leng Heng is having these visions. It is in this conclusion that karmalink is able to strike its own thematic gold, though it takes a leap of faith from the audience to stick with it.

RELATED: How ‘Rubikon’ Meets the Challenges of Telling a Confined Sci-Fi Story

Without giving too much away, the children’s initial adventure, while having a lot of fun with its own deeper ideas, then becomes a different type of journey where the film really takes off. The exploration of history into the unknown begins to turn inward to look at all that we don’t know about ourselves. Discussions of enlightenment and reincarnation abound, leaving us to ponder how it might connect with the film’s speculative imagination of what neuroscience can uncover. As much as it looks outward into time and space with all the majesty therein, so it is concerned with how it impacts our very souls. While many sci-fi films create firm divisions between itself and the spiritual, karmalink dive headfirst into what they have in common. In an evocative finale full of surreal sequences that make the most of its budget, it ends up showing how the way we use technology can actually open up our lives and our sense of self to the vastness of the universe. It invokes aspects of Buddhism just as it struggles with its sci-fi premise, merging the two in an intriguing if messy way that grows ever more gripping.

This transforms the film into a work of speculative fiction that pushes the boundaries of the genre through the journey of the child at its center. What if we could use technology to tap into its past? Is it forbidden knowledge that would only corrupt him or bring greater clarity to his life? The film doesn’t always provide simple answers, even as it asks more than the right questions that challenge our perceptions. Too often, many sci-fi movies with all their various hardware and gimmicks can become coldly logical to the point of being detached. You press a button that gives a command and you get a result. However, it’s what this technology represents about us that’s equally intriguing and what Wachtel seems most interested in interrogating. Why do we press the button and what does it reveal about ourselves in what we discover? The spectacular technology of this sci-fi story takes on an almost sacred meaning in karmalink. In the world of cinema, it has the power to forever transform those who use it. It gives them a glimpse of a state of being that feels like a technological nirvana of its own creation that taps into something intangible and incorporeal.

This takes the form of a series of in-room experiences presented to us at the start of the film. He uses technology as a bridge between the physical world and the spiritual world, something he calls the “realm of infinity,” which the characters prepare to enter through silent prayer. There is an incomplete nature to the way he brings this vast world to life, mainly because he is an echo of the same places and planes which is far from infinite, although there is still something to be admired. in the way he swings for the fences. Although not always connected, it demonstrates the films’ potential to wrestle with the spiritual and its connections to science fiction. It shows how the two bring the potential of the deep and the perilous if mingled. It touches on the many things we don’t fully understand and can only hope to ride the waves of. By the time it reaches its explosive conclusion, you almost wish it had been the focus of the whole movie and it didn’t feel like it had to keep grounding us into our own plane of existence. While this limits the potential of the journey he takes us on, the insights he offers offer something worth pondering even if not fully realized.

Bella Hadid shows off her travel style in a red shirt, camisole top and denim skirt for a private jet trip