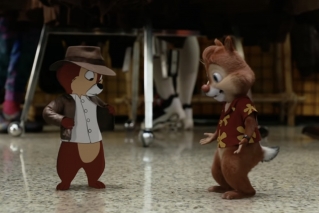 It’s no secret that I love when things get meta.

I’m a big fan of self-reference, especially when that awareness is used as an entry point to satirize and/or deconstruct. I dig it in books, I dig it in TV shows, I dig it in movies.

Take the new movie “Chip ‘n Dale: Rescue Rangers,” now streaming on Disney+. Now I was a bit older than the intended audience for the original TV show and its Disney Afternoon cohort, but I also had a younger sister, which gave me all the excuses I needed to watch. . And look, I did.

So when I heard we were getting a movie — one directed by Akiva Schaffer and starring John Mulaney and Andy Samberg, no less — I was intrigued. Particularly when it became clear that it was aimed as much at adult fans of the original as it was at today’s young audiences, using the show’s characters as a starting point for a meta-comedy about the rigors of fame and entertainment industrial complex.

In this world, humans and cartoon characters coexist. You have 2D and 3D and CGI and Muppets – the whole shebang. Two young chipmunks meet in elementary school, become friends and form a comical relationship. They grow up together and eventually decide to move to Los Angeles to pursue entertainment.

And so straight man Chip (John Mulaney) and jester Dale (Andy Samberg) end up with their own TV show. “Chip ‘n Dale: Rescue Rangers” is a hit, with Chip and Dale reuniting alongside their co-stars for a successful run. But after the third season, Dale decides he’ll go it alone, leaving the show to shoot a pilot for his own program, which leads to a falling out between the longtime friends.

Thirty years later, things have changed. Dale got the controversial CGI surgery to go from 2D to 3D and works on the convention circuit, making ends meet by peddling merchandise to fans of the series alongside other former icons (including, among others, the legendary Ugly Sonic (Tim Robinson), who was replaced after the internet hated his human teeth). Chip is now an insurance salesman – a good one – who lives with his beloved dog.

But when their old friend Monterey Jack (Eric Bana) reaches out to each of them separately for help, they find themselves forced to deal with each other again. You see, Monty has gotten too involved with stinky cheese pushers – known as the Valley Gang – and is scared of what will happen if he can’t pay. Specifically, he’s terrified of being smuggled, where he’s imprisoned and edited just enough to avoid copyrights and forced to star in foreign classic movie rip-offs.

Chip and Dale discover shortly after meeting that Monty has in fact been taken. The police are investigating, with Captain Putty (JK Simmons) leading the way, but there doesn’t seem to be much they can do. Detective Ellie Steckler (KiKi Layne) turns out to be a big fan of the show at the time and encourages Tic and Tac to investigate on their own.

And just like that, the two are thrust into a dark underworld of counterfeit cartoons and cheesemongers, doing their best to find their friend before it’s too late, only to find out how deep the hole is. chipmunk will (I won’t reveal who the mastermind behind all of this is – spoilers, etc. – but I can tell you the years haven’t been kind and he’s voiced by Will Arnett).

“Chip ‘n Dale: Rescue Rangers” is fun. Really funny. It’s a truly entertaining exploration of the toxicity of nostalgic impulses and Hollywood’s willingness to exploit any intellectual property beyond recognition, all framed by a narrative where two animated chipmunks solve a mystery. It doesn’t go as strong as it could in the end – it IS Disney, after all – but it’s still surprisingly thoughtful in how it approaches the current entertainment landscape.

The obvious comparison, with its co-existing cartoon and human world, is “Who Framed Roger Rabbit?” The filmmakers display an awareness of this obviousness, even going so far as to bring in old Roger for an appearance at one point. Now, this movie doesn’t quite reach that level – no shame there – but comes a lot closer than any of us had any right to expect.

The jokes are constant and riddled with the kind of self-referential self-awareness you’d expect. And almost all of them work (at least for this adult viewer); there are some pretty sharp satirical moments that land beautifully, as well as some solid sight gags and one-liners. Again, this is all sanitized subversion, but it IS subversive in its own way – certainly as subversive as you’re going to be under Big Mouse’s watchful eye.

The performances are a delight. Mulaney and Samberg have a wonderful relationship; it’s clear that screenwriters Dan Gregor and Doug Mand tapped into the strengths of their lead couple. Their energy animates the debates. But all voice casting kills. Banah is great. Same Arnett. Simmons is an absolute hoot and Robinson shines in limited time. Seth Rogen is super fun as the odd valley-dwelling dwarf guard (and the film capitalizes on his animated voice-work story). And Keegan Michael-Key is phenomenal as the sleazy Muppet Cheesemaker. Oh, and Layne — who has the toughest gig of all as the only lead actor who is, you know, a person — handles his business wonderfully.

“Chip ‘n Dale: Rescue Rangers” strikes an interesting balance, condemning the nostalgic roll of the entertainment cycle even though it’s part of that roll. It’s funny and unabashedly bizarre, evoking the spirit of the source material even as it strays in very different directions. Kids today might not get it, but kids from the 90s sure will.

The Spirit of the Grand Ole Opry Comes to Tucson | Music