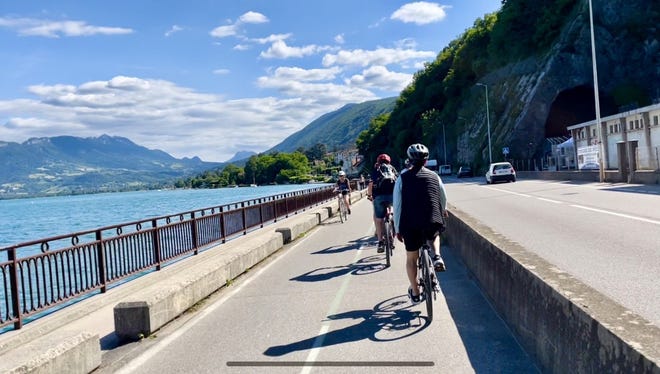 A bicycle accident on vacation shows me how the French ride

ANNECY, FRANCE – So there I was, in the Tour de France, battling the peloton as I raced through a fast corner, when suddenly – crash!

OKAY. Not quite true. It was not the Tour. But the rest is correct. I was on vacation, cycling, in France, around the corner. It was a hot afternoon in the lakeside town of Annecy, and a lot of runners were out. A group of young cyclists was coming from the opposite direction. One of them, a teenage girl, crossed the line in the middle of the road and pulled into the lane I was going down.

She didn’t move. She just kept riding, chatting with her friends. Maybe she assumed I would move out. What I owed. Hard. Swerving to avoid it, I hit the curb and sprawled off the bike and onto the concrete.

My hands struck first, then my shoulder and knees. My head, protected by a helmet, hit the ground and bounced. When I stood up, my left elbow pulled with pain. My knees were bleeding.

The friends I was riding with rushed towards me.

I was OK, wise head. But I saw the blood and shouted angry English words. Some of the French riders had stopped to gape at me (I was literally the wreck on the side of the road.) My friend Kim, who grew up in Annecy, confronted the girl who stopped in our way. She and a male friend were watching me wrestle.

“Well, there’s nothing we can do,” the guy told Kim in French.

“You could apologize,” Kim said.

They did not do it. instead, they left. As I poured bottled water over the bloody cuts and clenched my fists in pain, I silently stereotyped the culprits as rude French kids who somehow thought an American had brought him. Not proud of that. But that’s how I felt.

But the story does not end there. My friends helped me cycle a few miles to a beach club that Kim’s sister operates, and the people there used a first aid kit to wipe my injuries. I knew I had done some damage to my left arm, due to the throbbing pain, and I probably needed a stitch or two to heal the cuts on my knees. But it was a vacation in France, and all the doctors Kim knew were out of town. We could try an emergency room for an x-ray, I was told, but given the holidays, it would take four to six hours to do it.

I must mention that Kim has many friends. A former professional skater, he has traveled the world and is in a boundless mood. He is currently co-owner of a company called Drifter Vans in Southfield, which makes custom vans for people who love to travel. That’s how I know him.

But Kim’s family is from Annecy, a quaint town in the French Alps, where, apparently, some teenagers are terribly insensitive, but many others are not.

Caroline, it turns out, is a doctor. Good. To be precise, a veterinarian. But, as Kim pointed out, “an X-ray is an X-ray,” with or without fur.

And so, bloody bandages and everything, I went to the vet.

I should point out that Caroline was at home when Kim called her, getting ready to meet some friends at a restaurant. She agreed to drive to her clinic and open it just for us.

When we arrived she was dressed in shorts and a t-shirt. She studied my cuts and bruises and offered to x-ray my left arm. When we moved towards the machine, it hesitated near a panel of buttons.

“I have to put an animal,” she told Kim in French.

“Ah,” Kim said. He turned to me. “Which animal do you most resemble?”

A few fanciful answers came to mind. Cheetah. Wolverine. Bengal tiger. But I didn’t want to be laughed at.

Well, if you insist…

She took the x-rays, which showed a fracture in the radial head bone of my elbow. Then she bent over the wound on my right knee. She said he needed stitches to stop the bleeding.

She put a hand to her nose, signifying anesthesia. I told him that was probably OK, wondering if stitches in France involved some nerve-wracking ritual that I didn’t know about.

She did. I left there with x-rays, bandages, antiseptic and a neatly stitched wound near the kneecap. Also, a dog treat.

No. I laugh. But I left with a different vision of French citizenship. I realized there were rude kids everywhere, but there are even more amazing people, those who get first aid kits and call their friends and open clinics to stitch up your wounds and refuse to take money, as Caroline refused to take any from me.

So my Tour de France moment turned into something else, an intersection of bikes, sidewalks, concrete and culture. I emailed the x-rays to an excellent hand doctor from Michigan named Rachel Rohde and told her the story of the friendly French vet. She confirmed the fracture of my elbow.

“Plus you got rabies,” she joked.